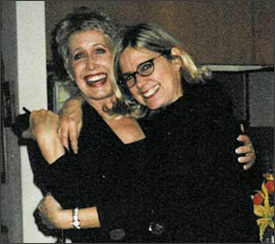 My Sister was brave and fearless. Always moving forward with an abundance of energy. Janice made family gatherings all that more special and exciting with her joy and enthusiasm. She had an amazing outgoing personality that attracted people to her wherever she went. She was really fun to hang out with. Some of the best times of my life were hanging out with Janice when she was performing at the Comedy Store and Las Vegas. It literally was an E-Ticket ride the whole time.

Janice was an excellent swimmer, she was a natural. When we first moved back to California from Oregon, we decided to go to the beach in Huntington. We were not wise then to the riptides and the big sets of waves. On this particular day we were out in the water when a huge set of waves came in, one right after another. Every time I came up to take a breath, there was another huge wave crashing down on me. I was so panicked and scared, I thought I was going to drown. Janice saw I was in trouble and swam over to me and took my hand and showed me how to swim down below the crashing waves. She held my hand the whole time, ducking down below the waves until the set had finally passed. How did she know how to do that? My sister saved my life that day, I’m not exaggerating, she really did.

I feel blessed that I got to spend some time with Janice in the last month of her life. We watched a lot of Turner Classic Movies, guessing who the actors where. Janice always got them right. (I would secretly check on my phone.) I love my sister, I lost my best friend and confidante. I will miss her dearly forever.
–Susan Hart-Shattuck 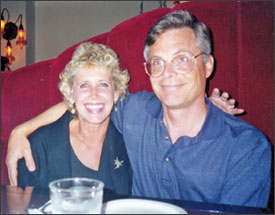 I met Janice at my sister’s New Year’s party when she was 16 years old. As I got to know her, I soon realized entertainment was in her blood. The following year, I remember her leading the audience in singing “Jingle Bells” after a high school evening performance open to parents and friends. While still in high school her fellow students flocked to see her perform at school assemblies.

We had a lot of fun together as young sweethearts playing guitar, surfing, traveling, playing ping pong, and tennis. She was loved by everyone who knew her: Family, friends, and classmates. She was devoted to family, close to her sister, helping out her brother, and loved her parents dearly.

Early in her career she acted in a number of plays e.g. “Butterflies are Free”, but was best when she could show her innate ability to entertain with her energy and magnetic personality. She was a brave entertainer performing at a variety of venues: Comedy clubs, cruise ships, Las Vegas opening for many big-name stars, and as a professional singer.

Living in Los Angeles she sometimes struggled with writing comedy material and so would go back to what she loved singing and entertaining. The “Comedy Store” liked to periodically insert an entertainer to break up the endless stream of stand-ups. Thus she became a well-known regular at the “Comedy Store”. She was featured on the cover of the Marie Claire Magazine as a rising comedy star.
–Kirk Hayward

When I was attending college at UCLA, I became ill and had to take a year off to recover. I went to several doctors but they all had trouble diagnosing me. One of them told me to go buy some vitamins and see a psychologist. In frustration, I went to a health food store and bought some books and started seeing a chiropractor. As I was going through the books, Janice suddenly exclaimed “Kirk, this sounds like your symptoms”. She had also been going through the books trying to help. The book she was quoting was on hypoglycemia and after reading what she had found I thought she might be on to something. I mentioned it to my chiropractor and who said we should do a six-hour glucose tolerance test. That test showed a large drop in my blood sugar but even more importantly, I had one of my worst low energy episodes ever. I called them “attacks”. When I told one of my doctors what we had found, he said they don’t recognize hypoglycemia as a disease. Well, needless to say, I read the book on hypoglycemia and with my chiropractor’s help began a slow but steady period of recovery. To this day I still marvel how Janice managed to diagnose my problem when all those doctors couldn’t. Like her sister Sue’s beach story, Janice helped save me and get my life back on track. That’s who she was, someone who cared about others and the kind of person you want to have around, just in-case.
–Kirk Hayward

A Little Song by Janice

A few years ago, I found a Fun Birthday card with a song to give to myself. I sent the card to Janice along
with HER birthday card and asked her to sing the song to me for my birthday in June. She did!!! Here it is!
Love you forever Jan!!
–Love, Cheri Wilson

My cousin Janice has always held a bright place in my life and heart. Being in her presence meant having a great time with tons of laughter with an equal mix of compassion, kindness and love.

Janice was an inspiration to me in her passion for performing. Her creative energy and humor seemed limitless. I have noted through the years, at times when I’ve felt especially challenged in my work, Janice has come to mind. Thoughts of Janice — her energy, grace and determination in her life and work — has served as an inspiration to persist toward my dreams.

Thank you, Janice, for your very special gifts to our world. You’ll always hold a very special and happy place in my heart.
–Your cousin, Kathy